TO: All Missouri Masons under the jurisdiction of the Grand Lodge of Ancient, Free and Accepted Masons of the State of Missouri

WHEREAS, on March 25, 2020, I, as Grand Master, issued an Edict suspending all lodge meetings, masonic community events and degree work through April 24, 2020; and

WHEREAS, on April 24, 2020, that Edict was modified to authorize subordinate lodges to hold communications under certain restrictions, including restricting attendance at such communications to resident members; and

WHEREAS, circumstances are such that the restriction on attendance to resident members may be lifted;

THEREFORE, under the authority of Section 2.010(k) of the By-Laws of the Grand Lodge of Ancient, Free and Accepted Masons of the State of Missouri as Grand Master, the Edict issued on April 24, 2020 is hereby modified and superseded as follows:

A. All lodges desirous of meeting may only do so to the extent the same is otherwise allowed by the laws, ordinances and regulations of the city, county or other political subdivision in which the lodge hall is located;

B. All meetings so held shall be conducted in a manner which complies with all laws, regulations, requirements and guidelines of the State of Missouri and any city, county or other political subdivision in which the lodge hall is located;

C. All meetings so held shall further be conducted in a manner which complies with all recommendations of the United States Centers for Disease Control (CDC) with respect to physical distancing and sanitation practices;

D. All meetings so held shall be considered open to all members of the lodge, members of other subordinate lodges of this jurisdiction, and members of any lodge in another Grand Jurisdiction which is in fraternal relationship with this Grand Lodge so long as the total attendance at the meeting shall comply with the remainder of this Edict in respect to physical distancing and local regulations;

F. Notwithstanding Section 7.060 of the Grand Lodge By-Laws, all meetings shall be conducted in the First Degree of Freemasonry so as to comply with all social distancing guidelines in the practice of Masonic Ritual;

G. No degree conferral, ceremony, education or other business that cannot be conducted in a manner that complies with the above requirements may be conducted by the lodge. Any lodge in violation of this portion of the Edict shall be subject to Masonic Discipline, including but not limited to suspension of its functions;

Notwithstanding the above, the Edict issued March 11, 2020 allowing subordinate lodges to cancel or postpone stated communications at the discretion of the Master when the purpose of said cancelation or postponement is to prevent or limit the exposure of officers and members of the subordinate lodge to coronavirus or some other such infectious or contagious disease of a similar nature remains in full force and effect through September 1, 2020 and all dispensations issued pursuant to that Edict remain in full force and effect.

This Edict shall remain in full force and effect until otherwise modified by further Order of the Grand Master. 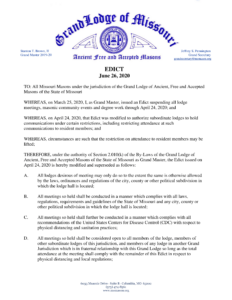 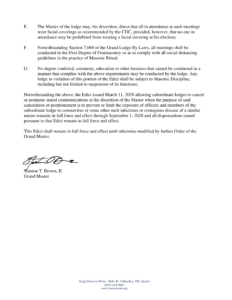